My interest in flash fiction began with a cat named Angus. Not a real cat, actually. Who would call a real cat, Angus? Only a cat with plaid fur could carry a name such as that. No. Cats are called Tiger or Fluffy or Smokey. Everyone knows that. Anyway, Angus the Cat is the main character in a storybook I wrote for my then-four-year-old-grandson James. I don’t know how many of you have four-year-old boys in your social circle, but those who do may have noticed that small boys have – um – a modest attention span. When I began working on Angus the Cat, I concluded that one of the chief attributes of this book would be shortness. As a short story writer whose work usually ranges between 2500 and 7500 words, I found that writing flash fiction (sometimes called short, short fiction, or micro fiction, or just “finished!”) was a venture into a new discipline, almost a new genre. The whole Angus manuscript, including titles, came out in fewer that 800 words. A surprise. A bigger surprise is that I found I liked working to lengths fewer than a thousand words. This summer I wrote several more of these tiny tales, this time for bigger readers. All of these stories were far fewer than a thousand words. The challenge of creating characters and putting them in situations that ultimately provide some form of resolution was genuinely satisfying, though not, I should say, as easy as one might think.

The late Irish writer, William Trevor, had this to say about the short story:

I think it is the art of the glimpse. If the novel is like an intricate Renaissance painting, the short story is an impressionist painting. It should be an explosion of truth. Its strength lies in what it leaves out just as much as what it puts in, if not more. It is concerned with the total exclusion of meaninglessness. Life, on the other hand, is meaningless most of the time. The novel imitates life, where the short story is bony, and cannot wander. It is essential art.

Well, I’m no William Trevor, and the closest I’ve come to creating essential art was the martini I made on that one Tuesday evening early last July, but when the Santa Fe Writers Project recently accepted for its October issue, my first attempt at publishing flash fiction, I was as thrilled as if it had been a novel. (Except for the lack of a novelist’s five-figure advance, that is.)

Characters live in flash fiction. Things happen. People say things (though not much). A character learns something. A reader does, too. Trevor likened short fiction to impressionist paintings. I might compare it to viewing stage action through a scrim. Viewers – or in this case – readers, have to do some of the creative work, some filling in of details, feelings, meanings. But this collaboration between writer and reader adds to the experience. I’m going to keep on glimpsing and attempting to share what those glimpses reveal. 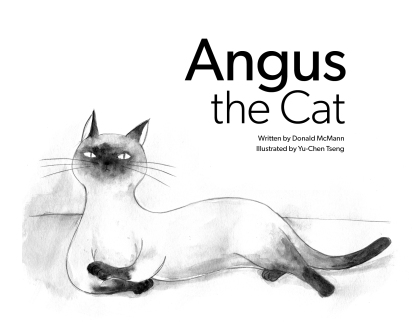 Two things: Angus the Cat was made for family and friends, but I want to thank illustrator, Yu-Chen Tseng and chief gaffer Barry Boroditsky for their help in giving James something to remember.

And, just so you know that I’m not abandoning stories of more conventional length (I know you were worried), I’m working on a story about a man who gives up a good job to do something for which he is woefully ill-equipped: writing jokes. It’s already at the encyclopedic length of 2300 words.

This site uses Akismet to reduce spam. Learn how your comment data is processed.